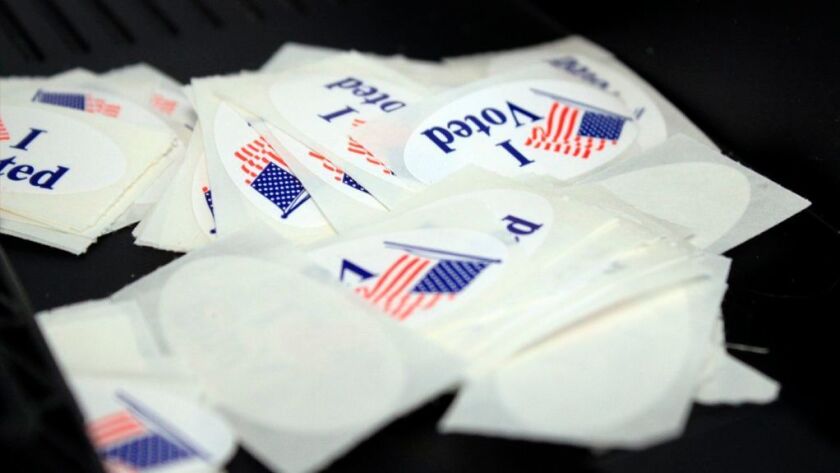 Jim Desmond was lobbied to change language of Measure A, emails and texts show

Backers of Measure A, the Save Our San Diego Countryside initiative that will be voted on in March, say a series of texts and emails obtained as part of a public records request show that Supervisor Jim Desmond was working with the building industry when he tried to change the ballot language at the last minute.

Measure A would require countywide votes for big developments in the unincorporated parts of the county that are not now zoned for them, something the building industry says would likely put an end to such projects. On Dec. 10, the Board of Supervisors had been scheduled to consider changing the ballot language of the measure just one day before the Registrar of Voters deadline. Desmond had placed the item on the agenda saying a change was needed to better inform voters. He also told at least two people that the language change was written by his staff. But texts and emails show that it was representatives with the Building Industry Association of San Diego County who approached Desmond, and lawyers for the No on A campaign, which is funded by the building and real estate industry, who not only asked for the item to be put on the agenda, but also crafted the wording which was very similar to what Desmond ended up proposing.

Rural land outside Escondido which is the site of the 2,200-home Newland Sierra development, approved by county supervisors under a general plan amendment. Measure A would forbid such changes. Photo courtesy of Newland Communities

By JP Theberge and Elizabeth Blankenship-Williams

The well-funded misinformation campaign against citizen’s initiative Save our San Diego Countryside — now officially Measure A — is being driven and bankrolled by the Building Industry Association and a handful of sprawl developers who repeatedly seek special exemptions to build in the fire-prone areas that our planning regulations avoid. This should tell you all you need to know about their motivations. They oppose Measure A because it makes it harder to use their vast political influence to get three developer-friendly county supervisors to approve these exemptions. They are already spending vast sums of money to confuse and hoodwink voters and contracting with high-priced public affairs and digital marketing firms to inundate social media with misinformation. On the other hand, Measure A is being run by unpaid volunteers — taxpayers, local community leaders, activists, urban planners, small business owners from all over the County — who were tired of the building industry manipulating the political process in San Diego County. Hundreds of volunteers helped gather 107,000 signatures to place it on the ballot. There’s no developer funding and no public affairs teams, and they’ve raised a fraction of what the developers have raised. Their efforts are truly grassroots, intended to protect taxpayers, and operate on a shoestring budget.
READ MORE VIA SOURCE: Opinion: Measure A Would Stop Politicians from Turning San Diego into Los Angeles – Times of San Diego

— The annual Oktoberfest in San Elijo Hills in San Marcos proved to be the community’s most popular event yet. Although 2,000 people attended the festival every year, folks say it still has a small community feel. Alpana Patel says she brings her family every year and loves seeing all of her neighbors in one place. “It’s a great way to run into people.”San Elijo resident Mike Adams says he enjoys bringing all five of his children to the fair because of “all the rides, all the fun, all the food, great for the community. All the kids can hang out with their friends.” “There is just an incredible sense of community here,” realtor Ed Philbrick said. “I think it’s an amazing value compared to other surrounding communities. I mean with this event for example, you probably have an event per month when you look at it, and the events are pretty elaborate.  There is a lot going on. Here you have a climbing wall, a (Ferris) wheel, food, beer (beer garden).  There’s always something going on in San Elijo and so it’s hard to complain about the value that you are getting. People aren’t always happy with HOAs but that’s not really the case here.”

UPDATE FROM THE CITY OF SAN MARCOS

San Marcos is arguably becoming one of the region’s most desirable cities, according to data collected by the San Diego Regional Economic Development Corporation (San Diego Regional EDC). It is one of San Diego County’s fastest growing cities, median incomes are on an uptick that’s outpacing the region, and business inventory grew 10 percent in the last decade.

“This translates to an annual GDP of  $7.9 billion that’s driving the high quality of life we all enjoy in San Marcos and across North County,” said Economic Development Manager Tess Sangster.

This economic momentum is partly being spurred by two developments: North City, which aims to anchor the City’s future downtown; and San Elijo Town Center, in the heart of that community.

“Beyond the economic benefits, each will help shape our city’s emerging culture. Therefore, we’ve been engaged from design concepts to helping find business tenants that best align with our community,” Sangster explained. “Each step of the way, we’re doing our best to inform the public.”

In that vein, here’s what you can expect to see over the next year at each development:

“It will help create a sense of place,” explained Darren Levitt, Vice President of Sea Breeze Properties, the developer behind North City. “Our ultimate goal here is to create a destination space where people want to gather and feel a sense of community.”

Levitt says the long-term vision includes a high-end movie theater and grocery store. While nothing official can yet be announced, there have been recent talks with a gourmet ice cream shop, yoga studio, and popular Mexican eatery.

In April, Union Cowork will open a 10,000-square-foot space near Umami Japanese Restaurant, Prep Kitchen, Fresh Healthy Café and Newtopia Cyder. In August, California State University San Marcos (CSUSM) will open its Extended Learning building—a six-story, 135,000 square foot structure that will house academic space and retailers, though none have been announced yet.

City staff is also reviewing a permit application from Mesa Rim for a 25,000 square-foot indoor rock-climbing gym. It is slated to open in 2020, right next to Urge Gastropub & Common House.

“In fact,  you’ll be able to sit on the patio of Urge and watch people climb,” Levitt added. “This is all part of the communal experience we’re working to create.”

For more information about North City, including updates about new tenants, visit northcity.com.

The village vibe of San Elijo Hills continues to take root as its central plaza becomes more bustling by the day. It’s not uncommon to see locals lounging on the greenbelt—or strolling along the shops and eateries, which as of late includes Lourdes Mexican Food, Starbucks, Everbowl, Sourdough & Co, CycleBar, Downtown Academics, San Elijo Pediatric Dentistry and Grand Vision Optometry.

These businesses are all part of San Elijo Town Center, which is still taking shape. Though most of it is filled, there a couple of restaurant space still up for grabs.

“We would love to see a local chef-inspired concept in one of those spaces,” said John Jennings, Senior Managing Director with Newmark Knight Frank, who is the listing broker representing the developer Ambient Communities.

Later this year, crews will break ground on the next phase of the center, which will be along Elfin Forest Road. Plans call for a two-story building with 7,700 square feet of commercial space.

There’s been interest from several businesses, including fitness groups, yoga studios, medical offices, one of the nation’s top five banks and other destination-oriented retailers, Jennings said.

“These are some of the ideas we’re open to, but we are not committed to anything yet,” Jennings said. “Whatever businesses end up there, we want it to be the right fit for the community.”

The nearby Albertsons grocery store, for example, owns its location—meaning the national chain has invested in the community, Jennings pointed out.

“So far, we’ve managed to attract the right type of businesses, and the sales back that,” he said.  “It also tells us the community is embracing this place, so we know we’re on the right path.”

We are facing a moment of truth in San Diego County. The recent fires in Paradise, Thousand Oaks and Malibu are a stark reminder that California is increasingly a fire-prone state and that some parts of San Diego County are at extreme risk. Because of this high fire risk, the county’s general plan discourages high-density development in the canyons and chaparral-covered hillsides of the unincorporated county. The county spent 13 years and more than $18 million creating this plan which directs where housing

San Diego County’s plans to approve thousands of new homes this summer could be hampered by a court’s tentative ruling this week.

A Superior Court judge has tentatively ruled in favor of the Sierra Club’s petition for a stay in a case involving how to compensate for increased greenhouse gas emissions from new housing development.

Sierra Club attorney Josh Chatten-Brown said the County of San Diego promised in 2011 to be a leader in fighting climate change. He said the county planned to offset increased carbon emissions from new housing developments with programs to improve air quality within San Diego County.

The suit says the county is now approving new housing developments but promising to mitigate for increased greenhouse gas emissions with carbon offsets elsewhere in the world.

The lawsuit attempting to block this strategy could set a precedent, Chatten-Brown said.

“Throughout the state, agencies are looking at San Diego to see what happens here, so I do think there is a real potential to have state-wide impact,” he said.

Chatten-Brown said the county needs to find programs to reduce greenhouse gas emissions within the county, rather than buying credits in other parts of the world.

“There’s plenty of county land, including the port, in which there is potential to create offset projects,” Chatten-Brown said. “The county, for whatever reason, decided not to go that route and allowed developers to go international.”

The lawsuit could affect Newland Sierra, a proposed master-planned development of more than 2,000 new homes in North County that the San Diego County Board of Supervisors is poised to consider later this month.

San Diego, like the rest of the state, is facing a shortage of housing. The question of how to make up for increased carbon emissions generated by increased traffic is one of several hurdles the region is facing as it struggles to expand to meet the demands of a growing population.