UPDATE FROM THE CITY OF SAN MARCOS

San Marcos is arguably becoming one of the region’s most desirable cities, according to data collected by the San Diego Regional Economic Development Corporation (San Diego Regional EDC). It is one of San Diego County’s fastest growing cities, median incomes are on an uptick that’s outpacing the region, and business inventory grew 10 percent in the last decade.

“This translates to an annual GDP of  $7.9 billion that’s driving the high quality of life we all enjoy in San Marcos and across North County,” said Economic Development Manager Tess Sangster.

This economic momentum is partly being spurred by two developments: North City, which aims to anchor the City’s future downtown; and San Elijo Town Center, in the heart of that community.

“Beyond the economic benefits, each will help shape our city’s emerging culture. Therefore, we’ve been engaged from design concepts to helping find business tenants that best align with our community,” Sangster explained. “Each step of the way, we’re doing our best to inform the public.”

In that vein, here’s what you can expect to see over the next year at each development: 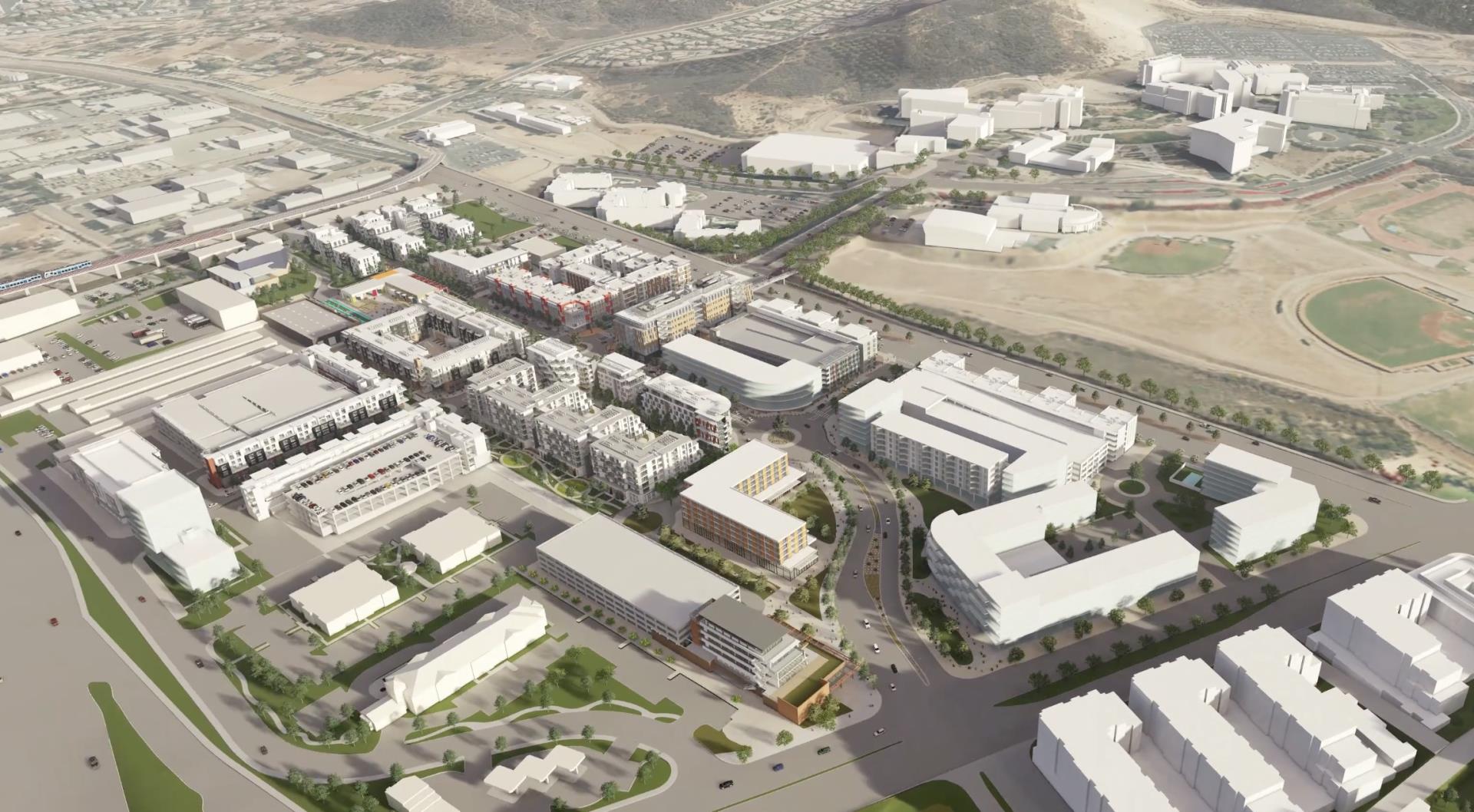 “It will help create a sense of place,” explained Darren Levitt, Vice President of Sea Breeze Properties, the developer behind North City. “Our ultimate goal here is to create a destination space where people want to gather and feel a sense of community.”

Levitt says the long-term vision includes a high-end movie theater and grocery store. While nothing official can yet be announced, there have been recent talks with a gourmet ice cream shop, yoga studio, and popular Mexican eatery.

In April, Union Cowork will open a 10,000-square-foot space near Umami Japanese Restaurant, Prep Kitchen, Fresh Healthy Café and Newtopia Cyder. In August, California State University San Marcos (CSUSM) will open its Extended Learning building—a six-story, 135,000 square foot structure that will house academic space and retailers, though none have been announced yet.

City staff is also reviewing a permit application from Mesa Rim for a 25,000 square-foot indoor rock-climbing gym. It is slated to open in 2020, right next to Urge Gastropub & Common House.

“In fact,  you’ll be able to sit on the patio of Urge and watch people climb,” Levitt added. “This is all part of the communal experience we’re working to create.”

For more information about North City, including updates about new tenants, visit northcity.com. 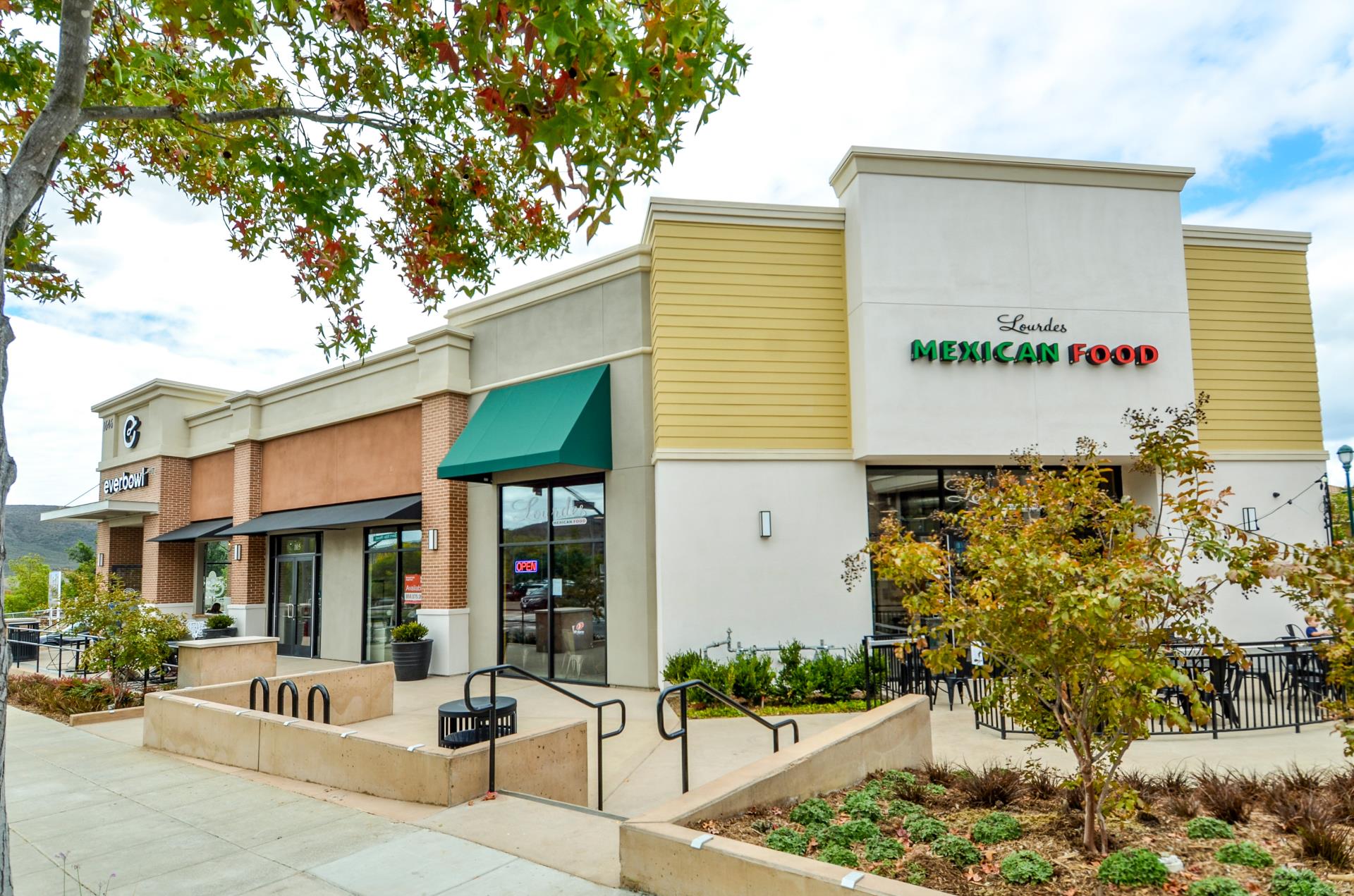 The village vibe of San Elijo Hills continues to take root as its central plaza becomes more bustling by the day. It’s not uncommon to see locals lounging on the greenbelt—or strolling along the shops and eateries, which as of late includes Lourdes Mexican Food, Starbucks, Everbowl, Sourdough & Co, CycleBar, Downtown Academics, San Elijo Pediatric Dentistry and Grand Vision Optometry.

These businesses are all part of San Elijo Town Center, which is still taking shape. Though most of it is filled, there a couple of restaurant space still up for grabs.

“We would love to see a local chef-inspired concept in one of those spaces,” said John Jennings, Senior Managing Director with Newmark Knight Frank, who is the listing broker representing the developer Ambient Communities.

Later this year, crews will break ground on the next phase of the center, which will be along Elfin Forest Road. Plans call for a two-story building with 7,700 square feet of commercial space.

There’s been interest from several businesses, including fitness groups, yoga studios, medical offices, one of the nation’s top five banks and other destination-oriented retailers, Jennings said.

“These are some of the ideas we’re open to, but we are not committed to anything yet,” Jennings said. “Whatever businesses end up there, we want it to be the right fit for the community.”

The nearby Albertsons grocery store, for example, owns its location—meaning the national chain has invested in the community, Jennings pointed out.

“So far, we’ve managed to attract the right type of businesses, and the sales back that,” he said.  “It also tells us the community is embracing this place, so we know we’re on the right path.”

Posted on November 14, 2018 by San Elijo Life Leave a comment

Posted on October 3, 2018 by San Elijo Life Leave a comment

Everbowl is a rapidly expanding new option in San Diego’s fast-casual, healthy food scene featuring a streamlined counter-service menu of build-your-own acai and other “craft superfood” bowls and smoothies. Everbowl is currently in the midst of a massive SoCal expansion. Each Everbowl location features a menu of “build your own” acai and other superfood based “bowls,” with unlimited toppings of fresh fruit and healthy “add ins.” They will be opening the doors to their fifteenth location this Friday.

Everbowl San Elijo Hills will be part of the long-awaited San Elijo Town Center, a five-acre retail and residential hub, along with fitness studios, restaurants and retailers including CycleBar, Starbuck’s and Lourdes Mexican. On opening day, Everbowl will be passing out samples of their popular bowls, while supplies last.

Each Everbowl location offers a focused quick-serve menu of “craft superfoods” – fresh fruit-laden, layered parfaits that allow the consumer to choose from one of four superfood base options: acai, pitaya, graviola or acerola. Customers can choose the liquid which is blended into the base and select from an extensive list of fruit toppings to create a custom bowl with healthy “super stuff” add-ins such as spirulina and bee pollen. Each bowl is priced at $8, and includes unlimited ingredients. They also offer smoothies, as well as a focused menu of grab-and-go salads.

High Point Builders is a family owned and operated business and a leader in providing value-added construction services to our customers by creating a successful partnership throughout the construction process. We are full service, specializing in complete design and build-out of commercial, hospitality, restaurant, retail and residential spaces. Our goal is to establish lasting relationships with our customers by exceeding their expectations. We gain trust by fulfilling our pledge, to complete your project on time and communicate with you every step of the way.

At High Point Custom Cabinetry there is something for everyone. Whether you have traditional, contemporary or modern taste, our professional designers will tailor your project to fit your style.

We offer high quality, fashion-forward, eco-friendly cabinetry, and countertops. We pride ourselves on meeting customer needs, competitive pricing to fit any budget and fast lead times!

Our office is located in the San Elijo Town Center at 1215 San Elijo Rd, San Marcos, CA 92078. With the convenience of location for our San Elijo Hills residents, you can visit us anytime whether you have questions or just want to stop by! We want to be your go-to builder or cabinet maker, San Elijo Hills!

You can visit us at www.highpointbuildersinc.com or call now at (760) 473-5110 to receive an estimate so we can start building your dream home, together!

Posted on September 29, 2017 by San Elijo Life Leave a comment

San Marcos, CA — The Vallecitos Water District is hiring an asphalt repair contractor to repair a portion of southbound San Elijo Road just south of Baker Street/Cooke Street on October 2nd between the hours of 9:00 am and 2:00 pm. One southbound lane will be closed. Schools, businesses and residents may experience increased truck and equipment traffic, minor traffic delays, lane closures, odors and noise during the work.